Cover of He Holds My Hand by Alice Hansche Mortenson

My wife found this self-published autobiography of Racine author Alice Hansche Mortenson for me, and I’ve read it several times. I’ve enjoyed it a lot, and I admire Alice for the work she put into this book. One thing I’ve learned over my years of reading history is that the simple act of writing down an event is immensely important. We don’t get to pass very much information down to succeeding generations, but we certainly won’t pass anything down if no one bothers to write.

Alice Hansche Mortenson did an admirable job of writing about the various chapters of her life. Here is the table of contents from her book, He Holds My Hand:

All throughout the book, Alice has included poems that she’s written to commemorate events in her life and to illustrate things that are important to her, such as her friends, her scrapbook, and religious feelings.

There are also many photographs, from her childhood, from her career as a nurse, through her first and second husbands, and to her retirement. 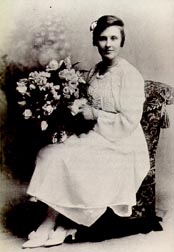 This photograph, taken in about 1920, is from a happy time when she married her first husband, John Sorenson. I’ll include her memories about this time:

After graduation in 1919 we returned home to Racine, and the following April John and I were married by Rev. Morris Johnson, the same minister who had baptized John. I thought John should have been a preacher for he had done some preaching while at college — filling pulpits occasionally for absent pastors; he seemed successful in it, but he didn’t feel called and his heart was in farming.

So we settled on a small farm on Lathrop Avenue in Racine; we named the farm Sunset Knoll and I contentedly resigned myself to being a good farmwife. We were happy together and were busy teaching Sunday School and serving the Lord in our local church. John became the Assistant Sunday School Superintendent and enjoyed his class of boys, and he reveled in his farming.”

Not only is this a good book about times past in Racine, it’s a good book to read to see how someone handles the good times and the bad times in her life. Alice handles everything that comes to her with grace, and we are lucky to be able to read her thoughts from her long life of writing.

If you would like a copy of this book, I recommend that you search Ebay from time to time. Copies seem to go on sale a few times a year.