The Brietzke Pauli Company was the first automobile garage in Racine. It was at 510 College Avenue for its whole business life, and Charles Brietzke’s son later had an electrical contracting business in the same building.

Racine Journal Times Sunday Bulletin Oct 21 1956
The first Racine-made, gasoline-powered automobile was constructed in 1900 by the late Charles F. Brietzke in the basement of his home at 808 Union Street.

Brietzke was then chief engineer for the Fish Bros. Wagon Co. but later went into business in the Electrical Construction Co. and became Racine’s first garage operator.

His daughter, Mrs. Howard Johnson of 1337 Blaine Ave., recalls that as a little girl she sat on the basement steps and watched him build the engine. She remembers her father tied a rage to the fly wheel and she counted the revolutions.

That first auto had a 10 horsepower, two cylinder engine. Its body was a Fish Bros. wagon which Frank Elsner, draftman and carriage-maker, modified with veneered woods.

When the auto was completed, it had the appearance of a one-seat surrey. It was open on both sides, and sat two people. A tiller was used to steer, and the engine was place underneath the body, as was the custom at that time. It had wire wheels and tires that Brietzke bought from a Milwaukee racer, a threespeed transmission and a forward and reverse lever. The dash board was like that of a buggy. 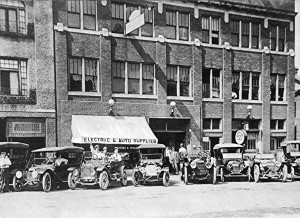 Mitchell models made in Racine by 1913 are shown in in this display in front of Brietzke-Pauli’s garage on College Ave. It was Racine’s first garage and the first gasoline pump is visible over third auto from right.

Brietzke and his daughter at the wheel of a 1916 Mitchell. 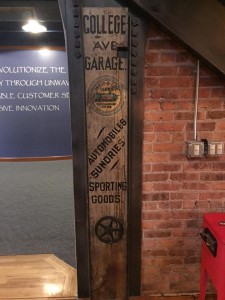 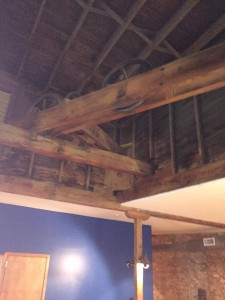