Another view of the exterior 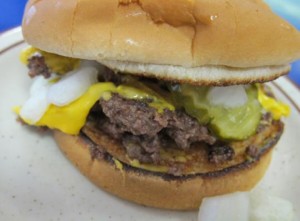 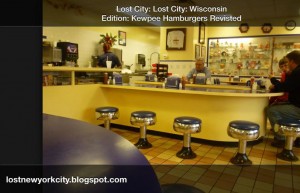 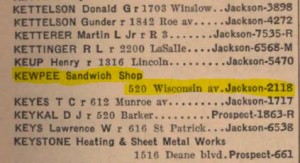 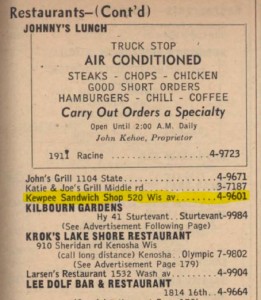 Kewpee burger and a Coke 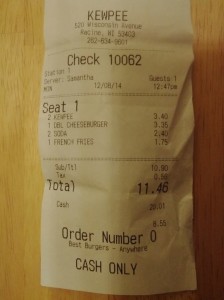 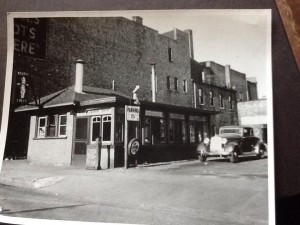 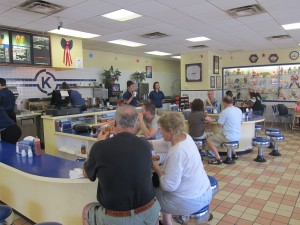 KEWPEE IN RACINE, WI
In 1926, Dick Sanford opened a Kewpee Hamburgs stand in Racine, Wisconsin at 520 Wisconsin Street. Among the staff at this location was a young man named Allen Durkee who went by the nickname of Speck. In 1930, Sanford sold the hamburger stand to Walter Block who retained Durkee as an employee.
In 1939, Block moved the hamburger stand from the front of the lot to the back of the lot allowing for the construction of a full size restaurant with the sign on the front saying Kewpee Lunch with the Kewpie doll mascot above it. The old stand was torn down upon completion of the restaurant.
Block died in 1957. Speck and his wife Emily Durkee bought the restaurant from Block’s estate. In 1962, the city of Racine built a parking structure above the restaurant. It stayed open during construction.
In 1963, Speck died. His widow asked her brother Richard Kristopeit, who worked at the restaurant part time since high school, to manage it. He bought the restaurant from his sister in 1968.
In 1972, Richard sold it to his two sons, David and Rick. David Kristopeit started working at age 14 and Rick followed his brother the following year after he turned 14. David bought out Rick’s share in 1992. Dave’s wife Trudy along with their children Mike, Katie and Joshua joined in working at the Kewpee making the establishment a family affair. They included Trudy’s brother Richard Buehrens who began working there in 1976.
In 1995, it was determined that the parking ramp above the Kewpee had become unsafe and needed to be demolished. This time, the Kewpee Lunch location below it was doomed as engineers determined that they could not tear down the ramp while leaving the Kewpee intact.
The city of Racine used eminent domain to acquire the Kewpee location. But another downtown Racine location to move Kewpee to was not to be found. So after the location closed on May 31, 1997, the parking ramp and Kewpee were torn down during June and July. David Kristopeit bought the resulting vacant lot back from the city in order to build a replacement Kewpee restaurant.
During construction of the new Kewpee, the staff was kept busy by catering a picnic for employees of Racine’s major employer, the household products company S.C. Johnson on August 2, 1997. They served 4,500 hamburgers which took five chefs over four hours to cook 720 pounds of ground beef.
The new Kewpee on the site of the old one opened on November 22, 1997. It retained the art deco look of the old one with a seating capacity of 48 compared to 36 at the old restaurant with parking for 15 cars. It was also handicap accessible. Inside, there is a large display case holding an amazing collection of Kewpie dolls.
In 2003, David sold the restaurant to longtime manager and brother-in-law Buehrens. running it along with his wife Mary and son Andrew. Andrew began working part time there at age 14 and was appointed by his father as the full time manager of Kewpee in 2018.
The Kewpee in Racine does not have a drive through window. So when the COVID pandemic broke out in March 2020 and Wisconsin forced non-essential businesses to close, Kewpee had to close for a couple of months. It was allowed to reopen at the end of May with the seating capacity limited to 15 and only for patrons to wait for take out orders. The closed seating areas were marked off. The dining area was allowed to fully reopen on January 2021 when Racine allowed for 50% capacity in restaurants.
The Kewpee in downtown Racine managed to survive the pandemic and is continuing to provide Racine with award winning hamburgers. Kewpee won Racine Journal Times Best Burger surveys multiple times and in 2021, they gave Kewpee awards for Best Burger and Best Lunch.

One thought on “Kewpee Lunch”