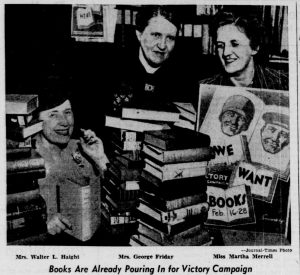 I grew up going to Martha Merrell’s Bookstore on 6th Street, and I bought some of my first Racine history books there. I remember that there was a store-within-a-store in the back which sold records.

There was actually a person named Martha Merrell, a woman ahead of her time, who graduated from Radcliffe College in 1922, then served as head librarian at the Racine Public Library and established the first Racine bookstore (the original Martha Merrell’s) in 1947. Martha had a wandering spirit and traveled the world as a very independent woman but was also generous in giving back to her community. Because of this, when William Kidd (of Western Publishing) bought the shop from Martha in 1954, he kept her name on the door.

Downtown’s only remaining bookstore, Martha Merrell’s Bookstore, will close its storefront and continue for now as an online business only.

When the bookstore moved into 600 Main St. three years ago, it was its fourth Downtown site. Co-owner Pamala Handrow said Wednesday the store will most likely close at the end of the month.

“We decided to take a break for awhile and do it right when we come back,” she said.

Handrow said several factors led to her and partner Vaughan Weeks’ difficult decision to close. For one, their initial three-year lease ended Sept. 30.

The leased area contained a coffee shop space that never materialized as a coffee shop when a third potential partner, who would have run it, backed out, Handrow said. So, instead of having a coffee shop to complement the bookstore, they were paying for unused space.

Also, she said, “We had staff that were going back to college, so we wouldn’t be putting people out of work.”

The recession and reconstruction of Sixth Street also may have played parts in sales levels, Handrow surmised.

The owners say Martha Merrell’s Bookstore will continue in business as an online enterprise. They currently supply used and rare books to the customers of large selling groups including Amazon and Barnes and Noble.

Martha Merrell’s will also market books of Racine and Wisconsin regional interest on their own Web site.

Martha Merrell’s Bookstore has had a continuous presence in Downtown Racine since 1950. The store was founded by Martha Merrell, then Racine’s city librarian.

It has passed through a succession of owners, each retaining the original name.

Sutherland said the corner storefront should be attractive to other business owners. “But with the current state of the economy, there aren’t a lot of serious business prospects out there.”

David Kherdian describes Martha Merrell: Warm and personable, serious, relaxed and open, and very committed to her shop. I had a little used book “store” on 2nd floor on 6th St, called The Sign of the Tiger, when she invited me to participate in some book event at Memorial Hall, despite how new and marginal I was in terms of being a bona fide bookseller, yet she included me and made me feel welcome. This was just before I moved to San Francisco and broke into print.

One thought on “Martha Merrell’s Bookstore”