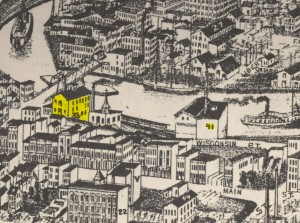 In 1882, the David Lawton Company merged with the Racine Brake Company to become the Belle City Manufacturing Company, formed under the corporate laws of Wisconsin, with $30,000.00 in capital. David Lawton became President of the new company, with Frank K. Bull, a former owner of the Racine Brake Company, as Vice-President, and L.E. Jones as Secretary/Treasurer. At the same time as he became vice president, Frank Bull was serving as treasurer for the J.I. Case Company, a major farm equipment manufacturing company which also happened to be located in Racine. (Frank Kellogg Bull can be seen in his role as president of the J.I. Case Company on page 87 of Full Steam Ahead: J.I. Case Tractors and Equipment 1842-1955, by David Erb and Eldon Brumbaugh [American Society of Agricultural Engineers: St. Joseph, Missouri, 1993]). In today’s world, this would never be allowed, as officers and board members of corporations owe a duty of loyalty to the shareholders of the corporation. This duty requires them to put the interests of the corporation ahead of all other economic interests–even their own economic interests. In the law, such a duty is called a “fiduciary duty.” When an officer or director has an economic interest which conflicts with this fiduciary duty, he stands the risk of being sued by the shareholders of the corporation for a “breach” of his/her fiduciary duty.