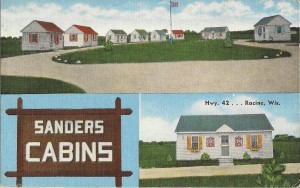 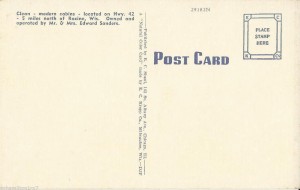 Randy Wolf: Edward and Verna Sanders opened the Sanders Tourist Cabins in the early 1940s, according to Bill Sanders, their son. The cabins were across from the what is now Mulligan’s Mini Golf on Highway 32.

Glad You Asked: What were Sanders Tourist Cabins? http://journaltimes.com/news/local/glad-you-asked-what-were-sanders-tourist-cabins/article_f5d83dc8-8499-5b20-958c-ade4d740db5b.html

Derek Monroe: I attended church with the family and school with Rita’s kids.

Jim Gardiner: There are a few left in back yards of the homes by STH 32 and Meadow Lane. I believe Jim Woolrage former Caledonia Treasurer had one or two on his property. They are a little bigger than an average garden shed.

Joanne Haysmer-Wachs: After Jim Gardiner there are for sure 2 left in the back yards

Joanne Haysmer-Wachs: My sister was with Brett Sanders and has 2 sons with him.