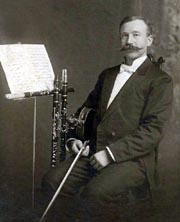 Kristie writes: Niels Rask came over from Denmark to play in the St. Louis World’s Fair. He eventually ended up in Racine, married and raised one child. This child, Sylvia, was a great friend of mine. She passed away last September at 94 years old. 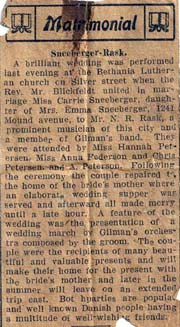 Sylvia used to tell me that her father, Niels taught himself how to play all of his instruments, and that he had made his own violin when he was a young boy. Sylvia also told me, that when he was a young boy, Niels would play this violin in the barn, and that the mice would come out when he played! So not only did Niels play for the King of Denmark & Kaiser Wilhelm, but he also played for Danish mice!

Niels came to the United States in the early 1900’s to represent Denmark at the 1906 World’s Fair in St. Louis, Ohio. Niels was a wonderful musician, and could play every instrument except the drums. After the World’s Fair, Niels came to Racine, Wisconsin to visit one of his relatives. He met Carrie Sneedberger at Church, and they fell in love. She didn’t speak Danish, and he didn’t speak English, but they both loved music. Carrie played the piano at church. Sylvia told me that her father, Niels went back to Denmark to sign his rights away to the family farm, so that his brother, Poul could inherit it. I think Niels had to do this because he was the oldest son.

Sylvia also told me that when her dad first came over from Denmark, he was a traveling salesmen for musical instruments, and that is why he could play all of the different instruments. Sylvia’s dad told her that sometimes traveling could be dangerous, so he always carried a dagger, and that Niels always traveled with his dog.

Sylvia’s mother, Carrie Sneedberger died when Sylvia was just a little girl. Sylvia was raised by her dad (Niels never remarried), and her maternal grandmother. Sylvia used to travel with her dad when he had concerts, and she used to play & sleep under the stage when her dad’s band was playing. I think somewhere I have copies of some of his programs.