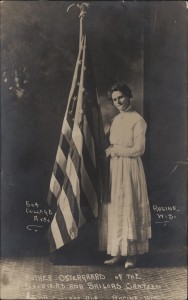 From Racine County in the World War:

Division 3. Soldiers and Sailors Canteen. — Mrs. Paul Ostergaard had offered her home on College Avenue as a canteen in 1917, and the committee helped her to make it a real home for visiting service men, to whom “Mother” Ostergaard greatly endeared herself. Thousands of meals were served there in addition to the free distribution of lunches, cigarettes, etc. The Patriots fund and many citizens contributed directly to this work.

From Racine Belle City of the Lakes:

On March 28, 1900, the Florence Nightingale Society was organized by Mesdames C. Jorgensen, P. Ostergaard, A. Beck, I. Jacobson, C. Nelson, Mrs. Johanson, and Misses Carrie Johanson and Margaret Jorgensen. The constitution at that time adopted declares the object of the society to be “the maintenance of a free bed or beds, room or rooms at the hospital known as the St. Luke’s and Alice Horlick Memorial Hospital, for charity patients, and to raise funds for that purpose and such other charities as the association may determine.”