Back in 2001, I was scanning Ebay for Racine-related postcards, and I came across someone offering two diaries from the turn of century 1890 to 1910 or so. One was written in Nebraska and the other was written in Racine. The Racine diary belonged to Daisy Winifred Brumsey who moved to Racine and who left a vivid record of her young life — living in boarding houses, going to church, working at a bank, and seeing the sights of Racine with friends.

RACINE, NOV. 18, 1908
Dear Journal,
I wonder where I shall be Nov. 18, 1909, and what will be written in these following pages. Everything is so uncertain, something we think we know, where we are likely to be, but still we can never tell. Who thought last year at this time that I should be working at the Manufacturers National Bank now. 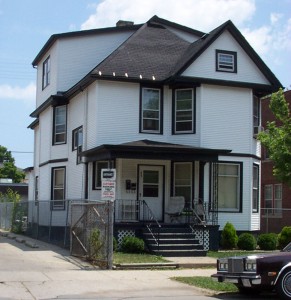 Daisy stayed at 827 College Avenue with other young women who worked downtown, and her social life revolved around just a few blocks between her house and downtown Racine. She mentions walking to work, getting the occasional treat at a candy store, and walking down to the lakefront with friends on the weekends. Depending on her finances, she often had to skip breakfast at her boarding house because of the expense.

Other young women in the boarding house were in the same situation financially, but they did figure out ways to be social and to enjoy themselves without much money:

Last Friday evening Misses Terry and McMullen had a little “spread” in their room. There were just four of us be-sides our hostesses, and such a nice time as we had – and the supper was so good and they had things arranged so cute, place cards, menus, etc. They had Mabel’s Judy dressed up, sitting very stiffly on the trunk – the unexpected guest – she was the only one who did not eat much.

My best guess is that “Mabel’s Judy” is either a dog or a small child. What do you think?

Daisy may not have been as lonely as some of her friends at the boarding house because her older sister Virginia lived in Racine with her husband Lon Powell and their baby.

MARCH 17, 1909.
Dear Journal,
This day has gone about as others.
This morning I arose about 6:10 and was at Sister’s ready for breakfast shortly before 7:00. Seven is the time. After breakfast I dressed Winifred, before coming to work. Lon and I walked down town together. I was early so stopped at the office thinking we might hear from Beulah. Sure enough Lon had a letter saying she would start Thursday.

Here Winifred is talking about Virginia and Lon’s daughter, Winifred Virginia Powell, who was born in 1907.

Beulah is their other sister who was evidently planning a visit from Nebraska.

On her days off, Daisy does have some leisure time which she spends with her friends:

About two o’clock Mr. Heffley called for me to go canoeing. Miss Foote and Mr. Redman were going with us so we went over to Miss F’s room then to the car line, Miss Winnie and Mr. Kolter also boarded the car which added to our boating party, as they were bound for the Rapids also. At the end of the car line we took the motor buss and were soon there.
Miss F. and Mr. R., Mr. H and I went in the canoe and Miss W and Mr. K. hired a boat. But we all met up the river and ate our lunches together. By the way Mr. H and R. furnished our lunches. They boys built a fire and we had a real enjoyable time, throwing water etc. We started back about 7 and arrived home about nine, we went up the river just about as far as it was possible to go. It was a beautiful day and we had a delightful time. Miss Foote and Mr. R. came over to the flat with us as Miss F. wished to see Mrs. Latta. Mr. H. suggested before he left that we go down to Kradwells and have some iced cream, which was perfectly agreeable to me.

Jan. 12, 1910
Dear Journal,
I received a telephone call last night just where I left off from Mabel Terry asking me if I would come over and stay
with Miss Doll. Miss D. is sick and would have been alone. I stayed with her until about 9:30. I understand better now why
she resigned.
Tonight I left the bank about 5:10 and went over to the Y.W. a few minutes to pay my gym dues. But they were having
a board meeting and I could not. I saw Opal and we walked up to sixth street together. I stopped at Tydemans to get some
bon bons for Miss Doll. Then as Opal was going to take the car I came on, stopped at Mornlands <??> a minute to inquire
about Miss D and then come on home. Tonight since supper I have been writing. I have 3 letters ready for the mail box, one
for Fanne, Bettie and the Home Folks. I went down to Hegemans with Beulah to get some ink etc. and tried to work
her to get some candy but had to compromise at last on going halvers, myself paying the bigger share by 3 cents.
Lon has gone to bed, Virginia is sitting here working on Winifred’s apron and Beulah is in her room writing. I will say
goodnight now and read a bit.

That’s all Daisy’s diary has to say about her. I was able to find out that she eventually moved with Virginia and Lon and Winifred out to California, where Daisy died in 1969. She left us an amazing document for those of us who like to research local Racine history. It’s one thing to read Mr. Leach’s excellent accurate accounts of Racine, but it’s another thing to get to hear what it was like to be young in Racine in 1910.

Here, in 1935, we can see that Daisy Winifred is doing well and is a member of a businesswoman’s club, and is in fact retiring president.