Can someone help me out with the names of which Racine factories changed to supply things for WW2? I know there were several. We watched “Swing Shift” which is set right after Pearl Harbor. It is about women going to work. Thanks. I know it was mentioned one other time.

Derek Monroe Nice little article but it makes me wonder if Twin Disc made transmissions for PT boats as well as they were also originally designed by Higgins Boat.
Racine indirectly gets a mention in the book “Bloody Skies”, written by a WW II B-17 bomber gunner, when he mentions gun barrels made by Hamilton Beech.

Suzanne Erickson Wallace Boems just south of sixth and east of the tannery. They switched from neon lights to freezers and some other small parts for something. My mother went to work there during the war.

Derek Monroe Most all of them did of course, the interesting part is the “what”. What did company “X” make?

Cody Klausch I know insinkerater did, not sure what they made though.

David Kowbel InSinkErator made the forerunner to the commercial grade disposers for hospital ships.

Norita Gour My mom worked during the war making the artillery shell boxes. I believe that would have been at Walker. After so many years the memory is a bit fuzzy.

Carol Barney Stinson I have a photo from Gortons showing a big banner that says “The Man Who Relaxes is Helping the Axis.”

Jeffrey Pinnow Jacobsen made field generators and generators to start the engines on B-25 Bombers.

Tim Molgaard My mother was a Rosie The Riveter. She also instructed other workers. I think it was for B-26 wings production at Case. Maybe someone can provide more details. Sorry for the quality. This is the real thing. 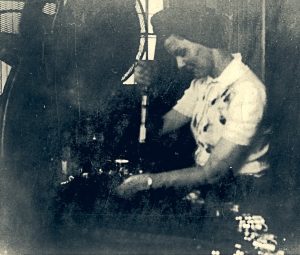 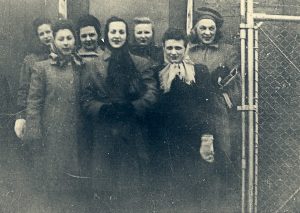 Gerry Grzyb Massey Harris was a major tank manufacturer. I think the government paid for the building that was latter MF’s North American Parts Warehouse (now Kraft?), and it was the tank assembly line. Corrections welcome if I got it wrong–I worked there one summer when it was a warehouse.

Teddie Klinkhammer Are you thinking of Kranz?

Mary Mc Gue My dad worked at Massie Harris as a tool and die designer. At the time ,there was a rumor that the arrow shaped flower bed , planted by the garden society was pointed toward the Massie Harris tank factory so as to aid the Germans if they ever flew over in an attack.