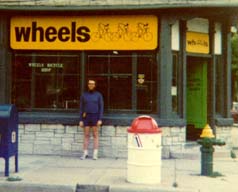 My dad, Alan, started selling bicycles out of our front room at our house at 1405 College Avenue in the summer of 1973 while he was teaching English at Parkside. My mom, Mary Anne, remembers how we got the fourplex at 1753-1755 Grand: 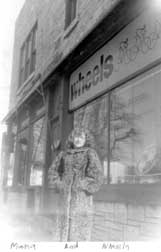 “Then Alan heard about Walter Smolenski having Mr. Zelewski’s building for sale, and that Mr. Z would take $7,500 for it, which seemed like a buy for two store fronts and two apartments and garages big enough for five cars. Walter said the price was $8000, Alan said that he had heard that Zelewski would take $7,500, Walter said that Zelewski should keep his mouth shut – they took the $7,500, and we got a loan for part of it from Bank of Elmwood at $200 per month. That was probably 1973.”

My brother and I loved to run around in the back rooms of this big fourplex because it used to be several separate buildings that had been joined together with a common roof and back and side walls. For instance, the back of the 1753 building still had basement windows set into the floor of the garage that joined the backs of 1753 and 1755. You could crawl down through these windows into the basement of 1753. 1753 had been a grocery store, and still had a room with a big, thick, wooden door on it that had been the walk-in refrigerator.

I remember the first few days after we opened the bike store and the neighborhood kids had just started to discover it. My dad was trying to answer all their questions, fix bikes, and show potential tenants the two apartments on the top floor.

Eventually we had enough business to hire bike mechanics, Kevin Parco and later, Danny Werwe. I believe that Danny Werwe raced his bike in the Kenosha Bicycle Bowl. I turned ten while I was hanging out there after school and I remember the mechanics teasing me, saying that now I was in the “double digits” that it was all over.

My dad would work at Parkside during the day, and then spend the rest of his time at the bike shop, putting together new bikes and fixing old bikes. He also taught a class at Parkside on bike repair, and would sometimes bring his students to Wheels for a class.

Eventually, it took so much time to run the bike store and to be landlords that my mom and dad closed up the store and converted it to an apartment. My mom thinks that we spent less time working and got more profit out of renting an apartment. Still, Wheels Bicycle Shop was a great place for a Racine kid to grow up. 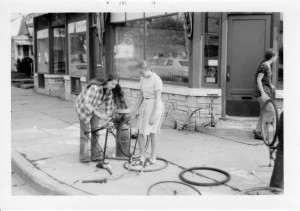 After being sold, this building was torn down in the Spring of 2003. 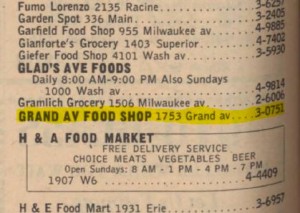 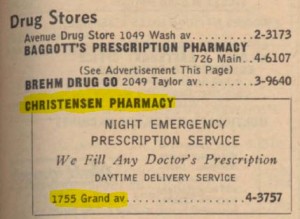 I remember the drug store being dark wood. It reminded me of the corner shop in the movie “West Side Story.” I think the name might have been Christiansons (unsure of the spelling). It had large glass cases on the south wall with comic books stacked in front. It seems like there were just wooden shelves on the north wall and the cash register was in an indention on the north wall. The ceilings were pretty high in there. I believe Franks was a butcher shop and it was much lighter colored. The cash register and counter were on the north wall and I think there were glass cases toward the back on the east side of the store front. I was never in the back of either store. I think the exterior was lighter brick or stone at that time.