Anyone who gets interested in Racine history eventually runs into Eugene Walter Leach (1857 or 1858-1938) because he wrote so many books and articles. When I was curious about the cemeteries in Racine, I ran across an article written by E. W. Leach and I enjoyed it a lot. Mr. Leach had a wonderful way of writing about history in a detailed interesting way that made it a pleasure to read: Racine Cemeteries One of my favorite books that he wrote is called The Methodist Church and Early Racine. The title is misleading because the whole first half of the book is about the people who founded Racine and who made it such an amazing place to work and live toward the end of the 19th century. Check out the index of this book — I just ran into Daisy Winnifred Brumsey again: Brumsey, Winnifred- 843 College Ave. From Eugene Leach’s biography in The Methodist Church and Early Racine:

I think his wife was Katherine, and he son was George W. Leach. He may have had a daughter Alice Leach. More possible information on wife Katherine: In the 1930 Census, she was listed as Katherine M. Leach, age 70, born in Missouri. Timeline

Update — unpublished history by Eugene Leach! When Mr. Leach died, he left behind an unpublished book: The Story of Racine County—A History. This was to have been his largest work. The manuscript filled 14 archival boxes at UW-Parkside and when reconstructed, has 1371 pages. It was discovered at UW-Parkside by John Magerus. Doing some detective work with the help of Anna Stadick at UW-Parkside, it seems that the manuscript is owned by the Wisconsin Historical Society and they are the ones who can make it available in a digital form for all of us who are interested in Racine history.

(5/13/2015)  Anna Stadick, the Interim Library Director at UW Parkside, is tracking down resources to get Eugene Leach’s unpublished history of Racine scanned so that we can post it and enjoy it! This unpublished history was left behind when he died in 1938, and has been in storage ever since. I’ve been talking to people at Parkside for several years now, and Anna now believes that there is a very good chance that everything will get scanned. Anna has been working with Michael Edmonds of the Wisconsin Historical Society to make this happen.

(6/2016) The scanning and the GoFundMe fundraiser have started! Here is an update from Melissa Olson of UW-Parkside:

I’m the librarian overseeing the digitization of the Eugene Leach materials. Anna asked me to send you an update. I’m happy to say that we are a little more than a third of the way through scanning the collection, and working on adding metadata to the images. We have two wonderful students that have been working on this collection: Rebecca Kuske and Alicia Ryan are both history majors at UW-Parkside. Rebecca began work on the collection this spring, and is now working on a summer internship at the National Museum of American History archives in Washington D.C.. Alicia has taken over scanning and is pictured here working on the project: 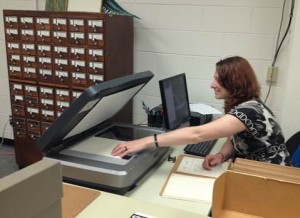 I’ve also attached a few “sneak peek” scans of Leach’s unpublished manuscript. They have been saved as small jpgs – not the large files we’ll be including in the online digital collection. 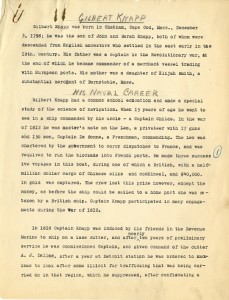 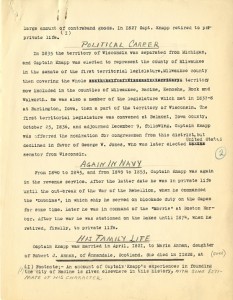 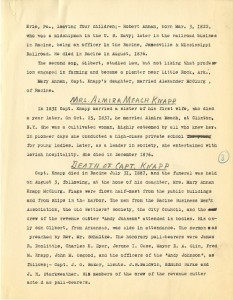 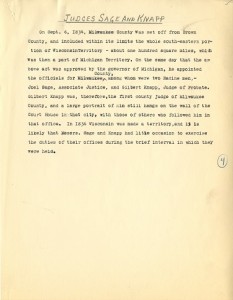 We’re very excited for this project!! If you have any questions, please let me know. 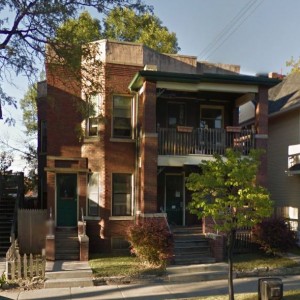 “To a chosen few historically minded persons in each generation is given the privilege of collecting and preserving the sacred facts of history, that they may not be lost to future generations.” 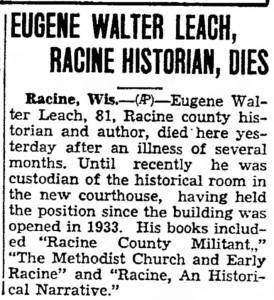