North side of Winslow School before the gymnasium/cafeteria was added

According to my neighbor Jeannette Schroeder, who attended Winslow before 1920, the north side of the school was the playground for the girls, and the south side of Winslow was the playground for boys. By the time I started at Winslow in the 1970s, the north side was a parking lot for the teachers and all the kids had to play on the playground to the south of the school. Jeannette grew up at 1413 College Avenue. I used to think that she lived at 1413 College all her life, except when she was away at college at the University of Wisconsin at Madison, in the Elizabeth Waters dormitory, but this turns out not to be true. For instance, in 1965, she was living in a tiny house at 309 11th Street. We also knew that she had a small house on Park Avenue which she rented out. 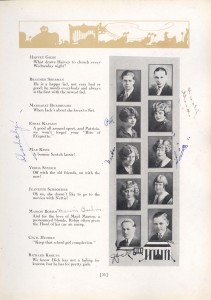 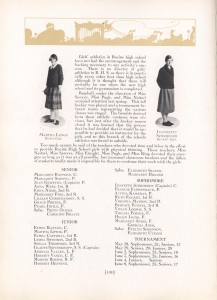 I wish I had taken pictures of the inside of 1413 when I was having my piano lessons there from Jeanette. I can still remember how everything was laid out, basement, 1st floor, 2nd floor, and a glimpse of the attic.

It seemed like the house was frozen in time. For instance, her kitchen appliances were from the 1930s and still worked perfectly.

Jeanette still slept in the same bedroom she had as a child — the back bedroom overlooking the back yard. Her brothers were in the middle room, although I don’t know if they ever shared because they were so many years apart. She still referred to the front bedroom as her parents’ bedroom, and she kept it mostly intact. I had to paint that front room one time, and it was really painstaking.

Jeanette kept a large flower garden in the backyard. She told me that the “step down” — the depression in the back yard was left over from when there was a barn there.

Joseph Schroeder, a leading dry-goods merchant of Racine, is a native of that city, born February 4, 1847, and is the son of Peter and Anna Schroeder, both of whom were natives of Cologne, Germany, but who came to this country in 1842. After spending a year in Buffalo, N.Y., they came west to Milwaukee, Wis., and in 1844 to Racine, where they continued to reside until their death. Both were devout Catholics. For about twelve years Peter Schroeder was employed as a salesman in Lee & Dickson’s general store, save for a few months in 1849, when he crossed the plains to California, but not hearing from his family, he hastened to return. For about twelve years he was also in the hardware store of Lee & Cooley. In the family were two sons and two daughters, who reached maturity. Anna is now the widow of John Newman; Eva C. is the wife of Matthew Thorn, of Kenosha; Joseph is the third, while John is a journalist.

Joseph Schroeder may be said to have received his education in the school of experience, for at the age of fourteen he entered the store of B. F. Weeks as errand boy, but soon after was regularly employed as clerk, which position he filled nine years, when he was made a member of the firm, the partnership to be limited to five years, although it was continued one year longer, when our subject purchased the interest of Mr. Weeks, and has since continued the business. At first they carried a stock of general merchandise, but gradually it was reduced to dry-goods exclusively. Mr. Schroeder now carries by far the largest stock in the city, in a two-story brick, 40×90 feet.

At Vienna, Walworth County, Wis., Mr. Schroeder married Bertha Zahn, a native of Racine but of German descent. Her father, Edward Zahn, came to the United States in 1839, and soon afterward settled in Racine. Her mother came in girlhood. Her father was in the hardware business in Racine a short time, and then moved to Walworth County, where he engaged in the milling business. He died in 1891, aged seventy-three years. Her mother is still living.

Unto Mr. and Mrs. Schroeder have been born three children — Nettie, Percival E. and Arthur J. The first named died in infancy. The others remain at home.

Politically, Mr. Schroeder is thoroughly independent, voting for the men he likes best. Religiously, he is very liberal, while his wife is a Universalist. He is a member of the Knights of Pythias and of the Independent Order of Odd Fellows. He has now been in trade twenty-one years, and has been quite successful, having made every dollar by his own exertions. 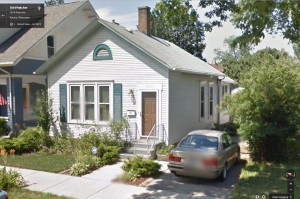 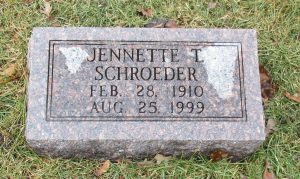