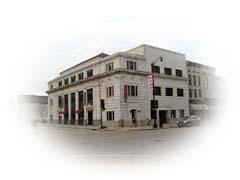 Named after Haymarket Square, where early Racine settlers came to purchase hay for their horses in the 1800s. The square was renamed Monument Square on July 4, 1884 when the Civil War monument was unveiled.

The original Italianate style building was designed for the Manufacturer’s National Bank which was the result of a merger of the Bank of Racine, chartered in 1852 and BB Northrop & Company, established in 1859. In 1919, it was redesigned to its current neo classical revival architecture consisting of white limestone with five central bays facing Fifth Street. Then in 1969, the building was merged with two adjoining buildings facing Main Street by Milton LaPour, realtor and developer. Current owner J. Raymond Borgeson of Guy Lloyd, Inc. purchased the building in 1991 and extensively refurbished and remodeled the exterior as well as interior portions in 2003.

Today, the Haymarket Square Building stands as a proud cornerstone of historical downtown Racine with pictures of its historical significance on display in the foyer area (front entrance) on the building.