Racine High School was on the same block that the Racine County Courthouse is on now. This is the second Racine High School, a very large building at the southeast corner of College and 7th Street that was built in 1894 and torn down in 1928. 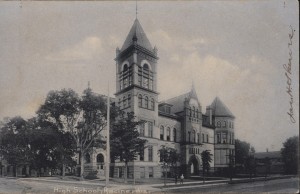 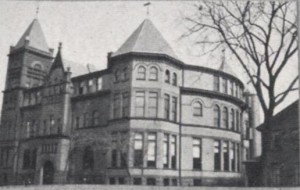 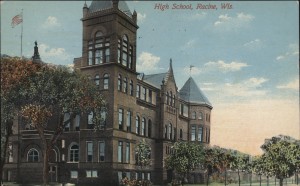 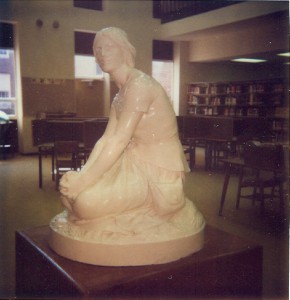 Joan of Arc statue donated by the RHS class of 1904 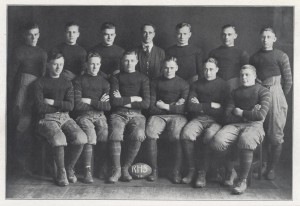 Racine High School Senior Annual 1909, as a PDF, 20 megabytes: Racine_High_School_Senior_Annual_1909_smaller Ben Hecht, who would run away to Chicago after high school to become a famous writer and journalist, is featured prominently in this book. 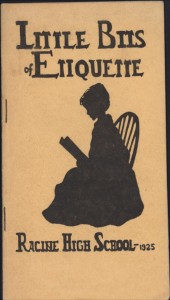 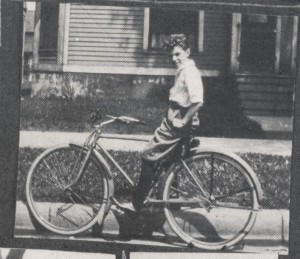 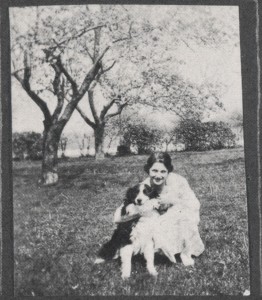 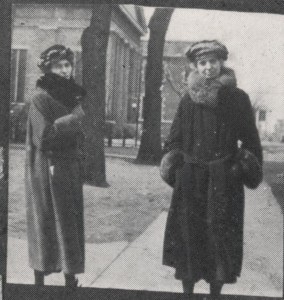 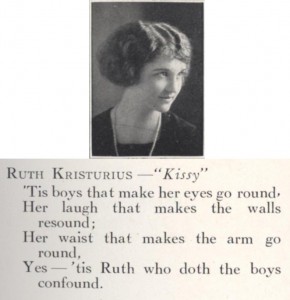 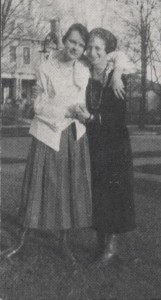 A nice angle showing what is now the Unitarian Church and the high school on the intersection of 7th and College Ave. 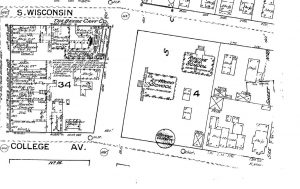 We’ve been looking at many postcards of the huge Racine High School which was at College Ave. and 7th Street, but it’s good to remember that smaller schools occupied that same space. For instance, in 1887, there were two small schools in the north half of that block (now where the courthouse is): the High School and the 2nd Ward School. 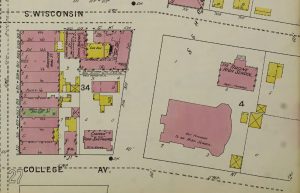 Now we know that Racine ran out of space in their high school and felt the need to build a new, much larger Racine High School, and it was still under construction in 1894. To imagine that this huge building only served the high school students of Racine to the late 1920s is amazing.

Dennis Tully: James Gilbert Chandler was a prominent Racine based architect who designed several buildings that are on the National Register of Historic Places. Those include the Shoop Building and the Racine YMCA building on 6th St. This is an architectural sketch of the Racine High School building that was located on the block that now holds the Racine County Court House. It was built in the 1890’s and was razed about 1928 for the construction of the court house.

The Racine High School was opened in December, 1853. It was the first high school in the state, and the eighth in the Northwestern Territory. It was situated on Section 16, between Barnstable (ed: College Avenue) and Wisconsin Streets, where the present building now stands. The description of the old school, as given by one of the alumni, is interesting: “A roof, four walls to hold it up, and a floor to hold it down; windows everywhere, for they realized – those who planned it – that as much light as possible would be needed on many subjects.”

John G. McMynn was called from the Kenosha public schools to be the first principal. He did excellent work with the high school, and was ably assisted in the early years by Mrs. McMynn.

When first started, only five applicants passed the examinations and received cards of admission to its classes but this number was soon swelled to nine. Mr. McMynn was a strict disciplinarian, and let the students know in the beginning that progress in knowledge depended upon themselves alone. In one of his early talks to them he said: “You have the elements of happiness and unhappiness under your own control. Act wisely, speak the truth, keep your promises, shun vain amusements, — in short, love God and keep His commandments.

Mr. McMynn was accustomed to open the morning session with a chapter from the Scriptures and an informal fifteen-minute talk on various subjects. Sometimes conduct was his theme, but more often it was his travels. On Friday afternoons the school had spelling contests, rhetorical exercises, or, once in a while, the students had to write impromptu themes. These must have been serious and weight, as such subjects as “Influence of Will Upon External Circumstances,” and “The Law,” were written on.

The High School served as the greatest place of interest in the town, and strangers were taken there first. Horace Mann and Ralph Waldo Emerson visited the school, and likewise many another famous man. Some industrious ladies took their knitting, and one lady was heard to remark that visiting the “High” was better than a circus. The teachers of this first class were Mr. John G. McMynn, Mrs. E. W. McMynn, Mrs. B. F. Walker, Miss Elvira Searle, and Miss C. A. Sheldon.
In December, 1858, was published the first edition of the “Public School Advocate.” This demands special mention, as it was the first paper ever attempted by the High School students, and, I believe, the only one. It was issued soon after the presentation of the portrait of Mrs. McMynn, who had lately died, to the High School, and contained original declamations prepared for that occasion. Among the subjects were “Science, the Handmaid of Religion,” “Example Better Than Precept,” by Miss Alice T. Porter, and “An Evenly Balanced Mind,” by Miss Kate Taft. On the last page of the paper was a joke, which I have seen lately in two different High school papers. But here it is, in its original and best form:
“During the pass summer a duel was fought by S. Shott and A. W. Knott. The result was that Knott was shot and Shott was not. Under these circumstances we would rather have been Shott than Knott.”

Classes have gradated every year since 1857, with the exception of three years during the Civil War. Mr. McMynn, himself, volunteered, and after the war came back home as colonel of his regiment. Between thirty and forty pupils enlisted, and six of these, namely James Hinds, John Morgan, Joseph Mann, George Yout, George Janes and John Phillips, lost their lives in the war. The class of ’65 inscribed their names on a white marble tablet, which now hangs on the east side of the lower hall.

The times have greatly changed since then, for, as one of the alumni describes it, “We had no pavements then to make smooth the road, no electric lights to brighten the way, no telephones to make easy the message, no street cars to carry us when the weather was stormy, no orchestra to delight us. The girls then wore sun-bonnets to school and calico dresses at graduation. They must have been very different from the superior school girl of today, with her puffs, Psyche knot, Cuban heeled shoes, and inverted flower-pot hats. At that time the whole Senior class took part in the commencement. One alumnus describes her commencement as follows: “We presented a bold front, and told a large and tired-looking audience how to live, how to climb life’s ladder of success, how to hitch your wagon to a star, to play well in life’s croquet, and how to do all sorts of things about which we had not slightest knowledge.”

In 1878 the High School removed to a new home, now called the Christie building. This, in its turn, became too small, and in 1894 the present structure was erected. Since then the efforts of the pupils and friends of the school have been directed toward the adornment of the rooms and the improvement of the grounds. Five or six rooms have been decorated with the money received from the different senor class plays. The class of 1909 raised two hundred and seventy-five dollars from their play, which they will use for the same purpose.

This year’s class is one of the largest ever graduated, having seventy-six members. The smallest class was that of 1872, when only three received diplomas. The teaching force has increased from three in 1879 to twenty-nine at the present time. There are now six courses, and besides these, five drills, which include music, drawing, and penmanship. Some of its associations are two glee clubs, an orchestra, two literary societies, and an athletic association. As to the character of the work being done in the High School, the inspectors from Madison, who recently visited the school, reported very favorably.

This history may serve to bring back to the members of the alumni the memory of their old school days, and to the classes of the present, it may bring a realization of the privileges and advantages which they enjoy. 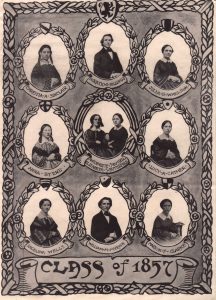 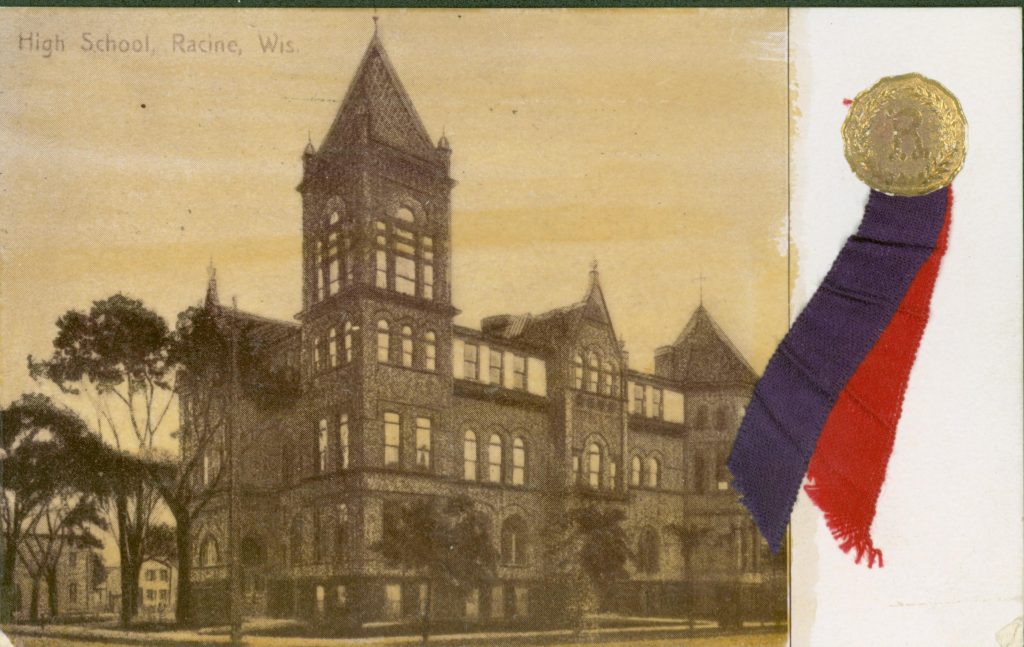