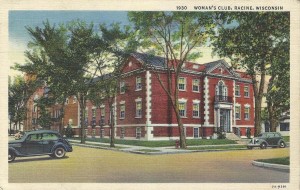 The Woman’s Club of Racine was formed in 1896 as a nonprofit group that supported Racine’s first public library and which was involved in many other programs in its history:

On a rainy afternoon in 1896, a group of women met and decided to plan a club for women. The purposes behind it were “to promote agreeable and useful relation among members, to bring together those interested in intellectual culture and practical improvement of women, to stimulate united effort toward higher civilization and especially to aid all movements toward promotion of a public library. (Racine The Belle City, Alice Sankey) 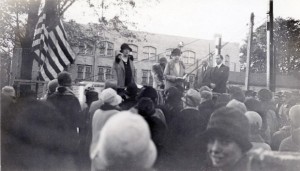 The Woman’s Club headquarters, at Lake Avenue at Eighth Street, is an attractive building that has withstood the test of time beautifully.

Racine’s park system owes a debt to the Woman’s Club:

Mayor Peter B. Nelson appointed the first Park Board in 1902, and W. H. Kranz of the Racine Business Men’s Association formed a park association. That was the start of the present park system. What is now Washington Park was the result of the work of the two groups. Mr. Kranz petitioned the city council to buy the land, and later the Erskine property. The Racine Woman’s Club later offered $1,000 toward a park-land purchase if the city would put up the same amount of money.

After an estate sale in January of 2011, the Club sold its building. At a final luncheon, the Club awarded the rest of its grants to deserving groups, and disbanded, citing dwindling enrollment.