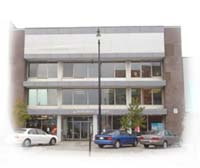 Built by First National Bank in 1913; it was named after the square on which it fronts. Monument Square was first named on July 4, 1884 when the still existing Civil War monument was unveiled honoring Civil War soldiers. Prior to that time it was known as Hay Market Square .

First National Bank was originally organized in 1853 under the name of Racine County Bank occupying a building on the northeast corner of Main and 4th Street . In 1964 the bank was reorganized as First national Bank, becoming the first bank in the country to be chartered under the National Bank Act of 1863. It moved to Monument Square in 1880.

Construction on the Monument Square building began in 1913 replacing the old smaller building which was razed. The new 3 story building featuring a granite front and large pillars extended through to Wisconsin Avenue . Later, a 20 foot 2 story addition was erected from the center of the south exposure to 6th Street which housed the Trust Department.

In 1955, plans were announced for a new bank building (now Chase Bank) at 500 Wisconsin Avenue which opened in 1958. The old First national Bank building was purchased by Milton F. LaPour and William Fergus who completed remodeling the structure into a multi-tenant and office complex.

The building was purchased by J. Raymond Borgeson in 1991. Since then, major heating, air conditioning and lighting changes have been accomplished as well as extensive renovation.