Robert Hall Baker purchased a one-quarter interest in the J. I. Case Company in January of 1863. Thereafter, he was known as one of the “Big Four,” along with J. I. Case, M. B. Erskine, and Stephen Bull. 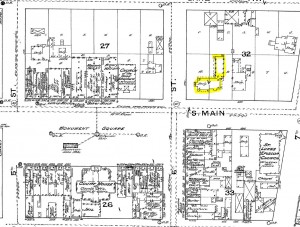 Robert and his wife, Emily Carswell (1839-1894, 55 years), were socially prominent people whose names frequently appeared in the society columns. Their tenth wedding anniversary celebration in December of 1869 found them surrounded by “a merrier crowd than was ever assembled in Racine who showered them with gifts of tin.” Considered newsworthy as well were such items as the construction of a $15,000 summer home at Lake Geneva, a brick addition to their residence at Sixth and Main Streets (now the site of the downtown post office), and the selection of a $6,000 monument for their family burial plot. Emily and her daughter gave the bells, cast by the Meneelys’ foundry in Troy, New York, and a Seth Thomas tower clock to St. Luke’s Episcopal Church in 1887. The $6,000 donation was in memory of their son and brother, George C. Baker, who died of pleurisy in Milan, Italy, at the age of 21. The Bakers contributed $400 to the Racine Soldier’s Monument Association in 1881, also in the name of their son.

Robert served the city as school commissioner, alderman, and mayor. He was elected state senator but was defeated as a Republican candidate for lieutenant governor. In honor of his civic and philanthropic contributions, a locomotive was named for him. 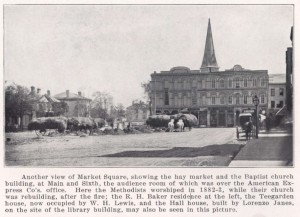 In death, as in life, Robert was considered noteworthy. A newspaper account of his burial, entitled “The Long Sleep,” described how over 5,000 people filed through the Baker mansion, past a black-draped coffin trimmed in silver. There were floral tributes shaped as pillows, broken columns, roses and crowns and gates ajar. Forty-three roses tied with satin ribbon signified the age of the deceased. The Rev. Dr. Eli Corwin, of the Presbyterian Church, eulogized Baker, in “The Lesson of His Life,” by saying: “The lesson of such a life is that we may succeed in that to which we set our whole heart, for which we gird all our energies. The lesson of such a death, when one had hardly passed the meridian of life, is written in the words of one far wiser than we, ‘Whatsoever thy hand findeth to do, do it with thy might, for there is no work, nor device, nor knowledge, nor wisdom in the grave, whither thou goest.” 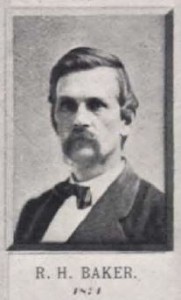 As an example of energy, enterprise and manly effort, he whose name heads this sketch is worthy of most honorable mention. His life-career thus far, full of varied experiences, has been marked with that success that invariably follows persevering and honorable endeavor, and he now stands among the front ranks of the prominent businessmen of his State. A native of Geneva, Walworth County, Wisconsin, he was born the 27th of June 1839, and is the son of Charles M. and Martha L. Baker. After completing his primary education in the public schools he pursued a collegiate course of study in Beloit, and in March 1856, first engaged in business on his own account. Going to Racine he accepted a clerkship in a hardware store where he remained two and a half years, and at the expiration of this time spent one year in the employ of Thos. Falvey, reaper manufacturer.

In 1860 he became general agent and collector for J. I. Case, in which capacity he continued to act until the 1st of January, 1863, when he purchased a one-fourth interest in the business, an interest which he still holds, taking a most active part in the entire management of the concern.

Aside from his business relations he is an influential man and has held many positions of honor and public trust. He was elected school commissioner in 1867, alderman of Racine in 1868, and reelected in 1871. In the following year he was elected to the State senate of Wisconsin, and in 1873 was candidate on the republican ticket for lieutenant governor, but defeated in election. In 1874 he was elected mayor of the city of Racine, and in November of the same year to the State senate. Besides, he is a director of the Racine Hardware Manufacturing Company, a director of the Manufacturers National Bank of Racine, also of the National Iron Company of De Pere, Wisconsin, and a director in several other manufacturing institutions, and president of the Hampton Coal Mining Company. He also takes an active part in the Centennial work, as is shown in the following appointment:

Office of The
Wisconsin State Board of Centennial Managers.
R. H. Baker was appointed sub-committee to supervise and arrange for the Centennial Exposition of 1876, the products or interests specified in class 16 of the classifications herewith enclosed, to wit; Agricultural machinery and implements.
(Signed) J. B. Parkinson, President.
VV. W. Field, Secretary.

Personally and socially Mr. Baker possesses most excellent qualities, and having traveled extensively throughout the United States he has gained a fund of information that renders him a most agreeable companion.

Though not a member of any church, he believes in the truth of Christianity, and is a regular attendant upon the Episcopal service.

He was married on the 20th of December 1859, to Miss Emily M. Carswell, by whom he has one daughter and four sons. 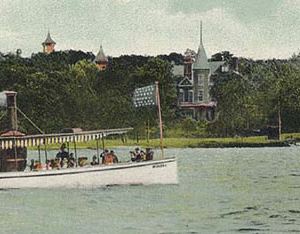