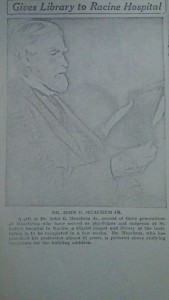 The eldest Meachem was born in Axbridge, England, on May 27, 1823. His family moved to New York in 1830. Meachem began his medical education in 1841 at the Geneva Medical College and graduated from Castleton Medical College in 1843. Even though he was the youngest student in the class he wasn’t yet 20 years old he had the highest honors of 150 students.

Meachem moved to Racine in 1862 with his wife, Myraette (Doolittle), and son, John Jr. He had become interested in Racine real estate years earlier through his brother-in-law, Senator Doolittle.

In 1863 Meachem became a surgeon at Camp Utley. He organized the Racine County Medical Society and later became president of the Wisconsin State Medical Society. In 1871, he began working toward the foundation of St. Luke’s Hospital after realizing the city’s need for a health care facility.

He was elected mayor of Racine in 1873 and served three terms.

“He was upright, honorable and outspoken in all that was for the good of society and government,” his obituary stated.

Dr. Meachem Sr.’s son, John Jr., was born in New York on June 10, 1846. He moved to Racine with his parents when he was 16 years old. He graduated from Rush Medical College two years later, again the youngest member of the class.

John Jr. was especially interested in obstetrics and was considered one of the best physicians in Racine.

When his father began the push for St. Luke’s Hospital in 1871, John Jr. jumped on the bandwagon. It was his responsibility to find a building for the hospital. He found a double house on Park Avenue and Tenth Street, which the hospital rented for $200 a year.

He served 12 years as president of the Racine Board of Health. He initiated the installation of the city’s first sewers and artesian wells, after studying the lax sanitation and polluted streets.

He married Eliza Smith in December 1870. They had two children, John III and Florence Eliza, who died at the age of 6.

The second Dr. Meachem served Racine for more than 70 years, quitting his practice only when he lost his sight near the end of his life. He died in 1942 at the age of 96.

The youngest “Dr. John” was born Aug. 9, 1873, in his parents’ house on Seventh Street. He graduated from Racine College in 1892, then attended Rush Medical College in Chicago. He graduated with his medical degree in 1897.

This Meachem moved around more than his predecessors. He worked in New York City, London and Chicago. He came back to Racine in 1900, only to leave for California in 1906.

John III returned for good in 1910 and joined his father’s practice. He was a member of the St. Luke’s staff, working as the attendant physician at Maternity Home, Children’s Hospital and St. Luke’s.

In 1924, he served as medical examiner and surgeon for the Racine Fire and Police Commission.

Never married, John III died in 1926 at the age of 53. He willed most of his estate to St. Luke’s Church and hospital. 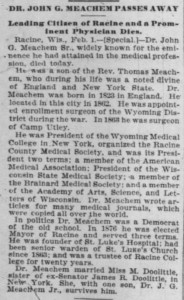 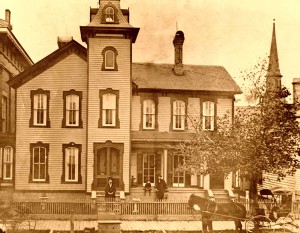 Dennis Tully: Dr. John G. Meachem and Dr. John G. Meachem, Jr. 409-411 7th St. had a Medical Practice in this building and it was also the residence of Dr. Meachem, Sr. in the 1880’s. The First Presbyterian Church on the Southwest corner of 7th and College Ave. is at far left. The parcel is now part of the Wisconsin Telephone Co. premises. Photo is from the Racine County Historical Collections.

Racine Journal News, September 27, 1926
Son of Dr. and Mrs. John G. Meachem Passes Away in His 53d Year.
Illness Extends Over Year’s Time
Faithful Work in His Profession, Interests Were Extensive.
The death of Dr. John Goldesbrough Meachem, 745 College avenue, occurred at 7:30 o’clock this morning at the family residence, following an illness of approximately a year.
Dr. Meachem was a native of Racine and of a family of physicians and surgeons known throughout southeastern Wisconsin for their ability and extreme caution in the practice of the medical profession.
He was born in this city Aug. 9, 1873, being the son of Dr. John G. and Mrs. Elizabeth Smith Meachem.
Racine College Graduate.
Dr. Meachem received his education, first in the elementary schools of the city and then in Racine college, from which latter institution he graduated in 1892. The next two years of his life were spent in the Manufacturers National bank in this city and then he decided to follow the profession of his father and grandfather.
With that object in mind he entered Rush Medical college, Chicago, from which he graduated in 1897. For one year following his graduation he acted as interne in the Polyclinic hospital, Chicago, and for six months he served in a like capacity in the Mothers’ and Babies’ hospital, New York City. He served as assistant resident physician for six months in the Lying-in hospital, New York City.
In 1900 he was licensed by the regents of the University of the State of New York to practice medicine and surgery in that state. Shortly after he entered the home office of the Equitable Life Assurance company, New York City, serving six months in the medical department.
Returns to Racine.
His return to Racine followed his visits to London and Paris, where he received liberal training and varied experience in his profession. For six years he engaged in practice here, and in 1906 his industrial enterprises drew him to the far west. He resided in California for four years, where he was director and secretary of the Portland Cement company. While serving in that capacity, he made several tours along the Pacific coast and in Mexico in search of deposits suitable for the manufacture of cement.
It was in 1910 that he again return to this city and assumed his practice of medicine and his surgical work. His practice grew year after year and became very large. So well known did he become here that he was always “Dr. John” to a large number of people.
He was a close student of medicine, had a large medical library and took great interest in the newest things in his profession. He was exacting in everything connected with his duties as physician and he was ever in search of the more advanced ideas in order that he might give to his clientele the best the profession could afford.
Faithful Hospital Worker
While Dr. Meachem was kept busy attending his patients, he could always find a little time in which to further the interests of St. Luke’s hospital. His efforts were in the direction of improving the service that institution could afford the public, and it was largely through his efforts that the hospital was placed on its present high plane.
He was a member of the staff of that hospital and attendant physician at Maternity Home, the Children’s and the St. Mary’s hospitals. He was a director of the Racine Pure Milk company, which company he helped organize. For many years he was interested in the work of Racine college and was one of the trustees at the time of his death. During the year 1924 he served as medical examiner and surgeon for the Racine fire and police commission.
Dr. Meachem’s charitable activities were carried on in a quiet way being known to but few outside of those who were directly benefited. He was unmarried and is survived by his parents only.
To Lie in State.
He was a member of the Elks club, of the Racine Country club, the American Medical association, the Wisconsin Medical association and the Racine County Medical society.
The funeral services will take place at 2:30 o’clock Wednesday afternoon at St. Luke’s church, the Rev. Harwood Sturtevant officiating.
The body will be removed to the church at 10 o’clock in the morning and lie in state from that hour to the time of the funeral services. The burial will be in Mound cemetery.

One thought on “Drs. Meachem”