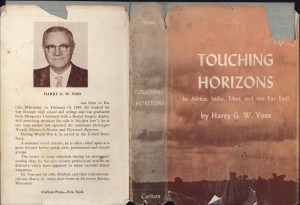 From the book, Touching Horizons, dust jacket: An inveterate globe-trotter and seeker of far, foreign places, Dr. Harry Voss presents in Touching Horizons: In Africa, India and The Far East, his personal  journal and almost day-by-day account of the extensive and intensive tour he took several years ago with his wife and young son. Touching Horizons, however, is more  than a travel book. It is a volume full of personal reflections, considered responses and idea. The author, and Argus-eyed traveler, kept his every pore open and absorbed, as few travelers do, the sight, sounds and smells of every nook and cranny he visited on his far flung journey. His Pen is always charged with humor and good-will.

Sailing on The Staatendam, the Vosses first visited peaceful and idyllic Portugal and traveled down the West Coast of Africa where they “penetrated” Dakar, Freetown, French Equatorial Africa, Luanda, Angola, Swakmopond, and Capetown. From Capetown, they went to Durban and re-entered the interior of “dark Africa.” Here, on these African safaris, Dr. Voss describes the recent insurgence and awakening of the natives, and the strife between former colonialism and imperialism and the emerging patterns of home rule, social reform and education.

In exotic India, the Vosses lingered along the Ganges where they watched the strange funeral rites, explored numerous temples, palaces and famous cities (Bombay, Delhi, Agra, etc.) and journeyed into the Himalayan regions of Lower Tibet where they encountered people and places that are rarely seen and visited. In the Indian interlude, there is a beautiful and winning chapter devoted to the Vosses’ sojourn in Agra and their visit to the exquisite Taj Mahal.

From India, their tour took them to Ceylon, Singapore, Thailand and then to Bali. Dr. Voss expatiates on the beauties and the simple, serene life of Bali. From the Java Sea, they moved to the Philippines, then to the extraordinary international city of Hong Kong, with a revealing and most illuminating visit to Formosa. They spent some time in Japan and managed to plumb beneath the surface of the courteous contemporary Japanese. A short interlude in Hawaii, a visit to Mexico’s enchanting western shores (after a brief stop in San Francisco), a short lay-over in the Canal Zone — and their journey’s end — New York.

All in all, Touching Horizons: In Africa, India and the Far East is, as Dr. Voss himself calls his grand tour, a “study in humanity.” This book brings the reader closer to the common man and worker of many exotic countries. Here one will realize the hard truth that East and West are a twain that have finally and irrevocably met. 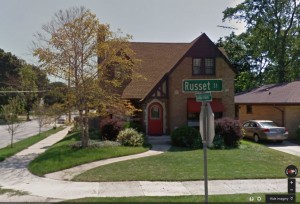 Because of my interest in the history of Racine, Wisconsin, I was glad to get this book, but as it turns out, the author mentioned Racine only once or twice. However, everything is written from the point of view of a Racine dental surgeon in the 1950s and 1960s, so that became my focus as I read through this 362 page book.

Dr. Voss writes with a clinical eye, and so includes details of physical maladies, hygiene, and sanitation that most travel writers would leave out. This 51,000 mile trip was planned as a trip of a lifetime, from Africa to the Far East, and included his wife Mildred and his son Harry Jr.

The trip starts in Portugal, which is very clean, according to Dr. Voss, but from there the trio arrives in Africa, and conditions get considerably worse, at least sanitation-wise. Former Portuguese colonies still seem clean, but the rest of Africa is shocking. This book was published in 1961, and thoughts of Communism are heavy on everyone’s mind.

Some quotes: While in Tibet, and suffering through cold lodging heated with dried manure, “It is my belief that Red China’s goals are to infiltrate all these countries slowly, then take them over. They will endeavor to kill off the religions of these peoples and make slaves of them.”

While in India: “News of the communist invasion of Tibet was passed to us.”

While in Japan: “Later in the evening, we went to a Sukiyaki party at the Kikkaso pavilion. Having been at better ones at home, we did not enjoy this one too much. The Sukiyaki did not have the flavor. The Geisha girls were nothing more than waitresses who were far too old, numb of joint, and well past the Geisha girl age. They revealed no training.”

On the way home, Dr. Voss and family land in Hawaii, where they have been many times before, and have a good time catching up with old friends. Everyone in the family still have the “Japanese flu” and are very sick, but are recovering in the warm sun. I was struck during this chapter how many times a dental surgeon from a small Midwestern town had traveled in great luxury to Hawaii with his family.

Dr. Voss concludes by wishing that everyone could have an education through travel the way he has, but on the other hand, if everyone in the world had access to education and its accompanying unrest, “I foresee a future of bloodshed.” Finally, “My friends ask me, ‘When did you get back?’ My answer is, ‘I’m still on the trip.’”