Diplomat, Author, Vitamin Co-Discoverer Have Occupied ‘The House on the Hill’

Editor’s Note: Today’s story opens the door to a series in which Journal-Times and Sunday Bulletin readers will visit a number of Racine’s historic homes. We express our appreciation to the home-owners who have made hitherto unpublished material available to us, so that all our readers may join in the celebration of our 100th anniversary as a Racine newspaper. 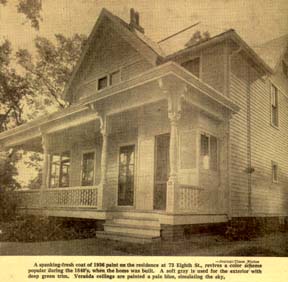 A spanking-fresh coat of 1956 paint on the residence at 73 Eighth St., revives a color scheme popular during the 1840’s, when the home was built.

The rambling residence at 73 Eighth St. overlooks the lake. A veranda runs around two sides, and bookshelves line not only the library but one of its living rooms.

The course of American history has been changed by owners who have rested on that veranda, and read those books. Among them are:

Philo White, its first occupant, publisher of the Racine Advocate, a founder of Racine College, later United States consul general and minister to Chile and Peru.

Amy Davis Winship, friend of Abraham and Mary Todd Lincoln, listener at the Lincoln-Douglas debates, and at one time affectionately dubbed “The oldest college student in the United States” by the University of Wisconsin.

Miss Marguerite Davis, co-discoverer of Vitamin A and Vitamin B, present owner and occupant. 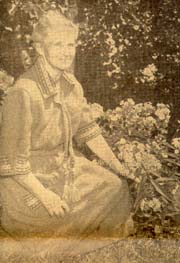 Miss Marguerite Davis, co-discoverer of Vitamin A and Vitamin B, in the garden of the home where three generations of her family have lived.

Miss Davis, former research chemist at the University of Wisconsin, is the daughter of the late Dr. John Jefferson Davis, pioneer Racine physician, and Mrs. Davis. When her father retired from active medical practice in Racine and turned to his first love, botany, he joined the faculty of the state university as curator of the herbarium.

It was in Madison that Miss Davis, a graduate of the University of California, applied for a job, received her first rebuff and applied a second time, saying “You can’t do this to me — we’re taxpayers!”

A brilliant young university professor, Elmer V. McCollum, was just beginning the studies in nutrition that were to make him world famous, and Miss Davis became his assistant. Today in encyclopaedias, textbooks and reference works, you read about the McCollum-Davis studies in nutrition and it’s Racine’s Miss Davis.

Their conclusions, published first in the Journal of Biological Chemistry in 1913, describe hitherto unknown factors in nutrition, which came to be known as fat-soluble Vitamin A and water-soluble Vitamin B. It was the first use of an algebraic symbol in such a connection. The McCollum-Davis discoveries, of course, revolutionized the entire field of foods.

Miss Davis inherited the house from her brother, the late John Archibald Davis and her grandmother, Mrs. Winship. Prior to Miss Davis’ occupancy, the home had been the residence of the late Mrs. Katherine Lender, and of the late Mr. and Mrs. Park Wooster. Mrs. Wooster was a daughter of Mrs. Winship by her first marriage to Col. John A. Davis, Civil War hero for whom the town of Davis, Ill. is named. Her second husband, Eugene Winship, owned and operated the old Racine Pump factory at State and St. Clair streets.

When Miss Davis undertook the redecorating and refurbishing of her home this summer, she chose as an exterior color the gray characteristic of the 1840’s when the house was built. She had the veranda ceiling painted a pale blue, according to the mode of that period, and added a soft deep green trip for the floor-length windows.

In the living rooms, she retained the tiled fireplace which her peppery grandmother, Mrs. Winship, had had moved from its original position over the violent protests of carpenters. (“It draws perfectly, too,” says Miss Davis.) 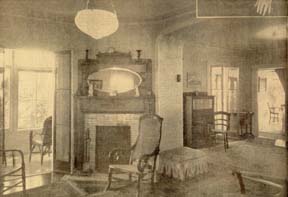 The fireplace which Mrs. Winship insisted on having moved (in spite of the anguished protests of the carpenters) remains just where she had it placed

On the walls she has hung landscapes and a still life painted by another famous Racine resident, Col. William Utley, one-time owner of the Racine Journal and step-father of Park Wooster. A position of honor in the dining room is accorded to an etching of Lincoln, a prized possession of her grandmother. In the period manner, too, is the painting of flowers on frosted glass, done by Mrs. Josiah Hocking.

It was in these rooms that Amy Davis Winship entertained at tea for Robert Ingersoll, the famous atheist — and invited Rev. Olympia Brown Willis. Yes, the sparks flew!

Mrs. Winship, worker for women’s rights, temperance leader and friend of Frances Willard, founder of the Womens Christian Temperance Union, was hostess to most of the celebrities who spoke in Racine during the ’70’s and ’80’s.

When Mrs. Winship and a small group of local women sponsored a coffee and reading room for young men of Racine, the Journal commented, May 12, 1875:

“It is a place where young men having no home can go to spend their evenings reading or talking. It is not expected that every time they step in, they must spend money. Just give the institution one trial. Don’t get this idea into your heads, that it is too ‘toney.’ You don’t need to put on your best suit and white shirt; go in your working clothes and trust the Journal when it says, you will be as welcome as though you wore a diamond as big as a goose egg.”

Susan B. Anthony and Mrs. Winship were close friends. On one visit during Elizabeth Davis Wooster’s childhood, she brought an apronful of kittens for the famous suffragette’s inspection.

“Take them away!” ordered Miss Anthony — and Mrs. Wooster never quite forgave her. 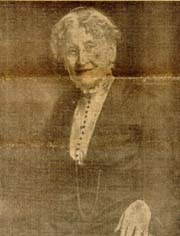 Mrs. Winship’s autobiography, “My Life Story,” tells of her return to college classes at the age of 80, first at Ohio State University, later at the universities of Wisconsin, Johns Hopkins and Southern California.

The Winship family acquired the Eighth St. house in 1870. During Civil War days, it had changed ownership several times. Once it was sold for taxes, and when the bidder realized that his offer of $387 was the highest, he promptly recalled it. Later, it went to Lucius S. Blake for $161 and costs.

Philo White is listed in its abstract as the first owner. The year is 1849. White, a native New Yorker, had edited newspapers in the east and south before coming to Wisconsin. In Milwaukee, he became a close associate of Solomon Juneau, and, with Juneau’s backing, founded the Milwaukee Sentinel.

Ten years later he was owner and editor of the Racine Advocate. In an issue of February, 1846, he rebuked the Sentinel for “bandying of naughty epithets.”

White was elected a member of the territorial council in 1846, and two years later became state senator. In 1852, he was chosen as a presidential elector.

One of the founders of Racine College, he returned to deliver its commencement address in 1862. In the intervening years he had served as United States Consul General for the Free Hanseatic cities of Hamburg, Lubec and Altona, and later as the country’s ranking diplomat in Peru and Chile. White’s visit to Racine College was his last to the city where his one-time home ranks as one of the first.

[Web editor’s note: According to the Social Security Death index, Marguerite Davis was born in Sep. 16, 1887, which would have made her 69 years old when this story was written. She died eleven years later in Sep. of 1967.]

2 thoughts on “Diplomat, Author, Vitamin Co-Discoverer Have Occupied ‘The House on the Hill’”