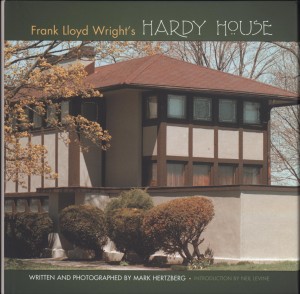 I grew up a block and a half from this Frank Lloyd Wright house, and I would see it every time we walked from College Avenue down to the lakefront. Only later did I find out that it was called the Hardy House. For a while, my parents were interested in buying this house and renovating it, but decided against it, figuring that my brother and I would find a way to get out of the house unsupervised and into Lake Michigan.

When this book, “Frank Lloyd Wright’s Hardy House” appeared on my Ebay search, I knew I had to get a copy to learn more.

In the picture, this book looks like a coffee table-size book, it it’s much smaller — 7 1/2 inches wide by 7 1/4 inches tall. If there had been a coffee table-sized book available, I would have bought it, because the photographs are that good. “Frank Lloyd Wright’s Hardy House” was written and photographed by Mark Hertzberg, directory of photography at the Racine Journal Times, and he has done an excellent job.

This book is broken up into two chapters — “Chapter 1: A Kooky House” and “Chapter 2: The Stewards of 1319 Main Street: Six Owners in One Hundred Years,” although at the time of the writing of this review, 2015, a seventh owner now has the house.

In Chapter 1, the author goes into detail about the design, building, and early years of the house. Wright designed the house in 1904-1905, and it was built in 1906. There is some documentation that says that Frank Lloyd Wright and Thomas Hardy were friends and roommates at the University of Wisconsin-Madison, but university records do not support this. Hardy was living with his parents when he bought the land. Hardy and Wright ended up scaling back the design of the house so that only half was built, but students of architecture say that this was the first Prairie style house on a dramatically sloping lot.

The house is built almost flush to the sidewalk on Main Street, and the entrance is deliberately low — 6 foot 5 inches — so that when you step into the two-story living room facing the lake, the effect is that much more dramatic. The house has seven levels on three floors, with stairs connecting everything. On the lake level, there are showers for when the house faced the 14th Street Beach, which was destroyed in the 1970s when the City of Racine filled in the breakwater.

Thomas Hardy took out three mortgages on his house, finally losing it in 1938 to foreclosure.
Chapter 2

There is a private notebook that is passed from owner to owner, detailing changes, blueprints, and photos. There is some of the original furniture left, including hidden chairs, but the original beds have been lost.

One of the most difficult things for the owners of the Hardy house is the lack of a garage. One owner had a brand new car totalled while parked in front of the house just days after it was purchased. There have been plans to add a garage, but owners decided against it after they found it would destroy the view from the kitchen.

Each family section has personal reminiscences and details, and sometimes photographs.

This is an excellent book, with many unpublished blueprints and drawings, and wonderful photographs from Mark Hertzberg. I recommend that any student of Racine history get a copy for themselves to add to their bookshelf.

One thought on “Hardy House”