I found this letter from a student at Racine College to Stafford Smith in Plymouth, Wisconsin on Ebay, and it’s the first Racine College letter I’ve ever seen myself. The paper has an embossed figure in the upper left hand corner. It is written in elaborate handwriting (see scans at the bottom of this page) and I have attempted a first, rough transcription below.

Plymouth, Wisconsin is near Sheboygan, Wisconsin, and there does seem to be some kind of record of a Stafford Smith in Plymouth at about the right time: http://sheboyganhistory.com/b/smithh.htm

Stafford met his early death at Sheboygan Falls, April 2, 1864.  he was running to meet an incoming train, when his foot slipped and he fell under the wheels.  This event nearly destroyed the life of his sister Anna, who witnessed the scene.

The letter refers to the “ruins” of Taylor Hall, which burned.

[Handwritten letter from a student at Racine College, written February 28, 1863.]

Racine College
Feb. 28/63 [1863]
Dear Staff
I am sorry I was so obscure in my last letter.
I don’t think I can give a very lucid explanation, if you have not made it out yet, it is of no matter, you don’t loose [sic] any thing.
The boys in the apple scrape [?] mostly took a whipping (very nearly all the boys who were concerned in it, being small ones/ but – some however took the twenty marks.
My attempt at short-hand has been relinquished for the last two weeks on account of having so much more less to get
—-
[Page 2]
the book I have is a one horse arrangement which I bought from one of the boys it is an English edition, the name of it is Goffe [?] Educational Series of Shorthand.
We have had the vocational changed working two times in the year of about four months and a half in duration, the vocations are in the spring and autumn, six weeks each from the 1st of May to the middle of June, and the 19th of October until the 1st of December there being no vacation at Christmas & Easter.
If you got East – in the fall during the time that I am home you can make me a visit instead of the one you intended to make here.
—- [Page 3]
I have not yet made up my mind as to what I intend to be. The height of my ambition is to be a stock actor in some principal theatre. I will fool around all day and at night I will have my work to do but it will be the only work that I should like.
I heard that you were going to be a reporter for the Times down at Chicago. When that is so we will have gay old times.
A few days ago we had quite a stormy time, the wind blew so hard that it caused a part of the ruins to fall in and it broke all of the new wood work which they had lately built up.

—- page 4
The death of those three women [? illegible] was quite a coincidence.
The boys are again beginning to renew their cricket clubs.
Rufus Smythe left about a week ago as has gone to the normal [moral?] School at New port. – I am not sure that he has gone yet, but I know he intends to soon.
Gerald Staunton [spelling?] is very sick, he was a going to go home to his sister wedding the day after he got sick. It was quite a disappointment to him.
I suppose you have heard that Wm [illegible] is a going to leave this place in course of two months or so.
Excuse this poorly written letter. I think short-hand has affected me.
Gus Taf Bunter [? Spelling] 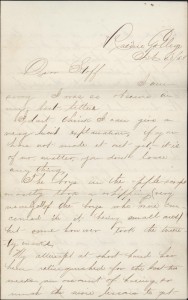 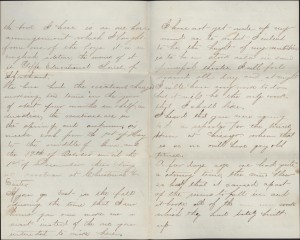 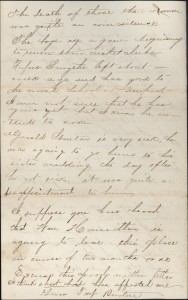 One thought on “Racine College Letter to Stafford Smith”