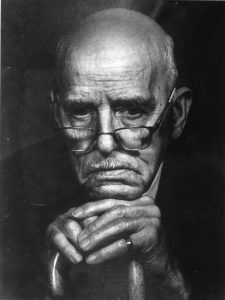 From the Racine Journal Times article, August 26, 1997, by Mark Hertzberg:

Imagine a dapper mustachioed man clicking, clicking, clicking pictures for more than 70 years around Racine. Blizzards, civic celebrations, train wrecks and boats in the harbor were all part of Wilfred Marshall’s Racine, a Racine he preserved forever as he prowled the city’s streets with his camera.

Though he worked for the postal service, Marshall was really Racine’s first photojournalist. He was two months short of his 100th birthday when he died April 13, 1977, leaving behind a rich legacy of photos of 20th century Racine.

Marshall retired from the postal service in 1943, and according to his obituary, he was “usually found in the thick of any event … snapping away or carrying his tripod and camera from one position to another.”

He was on the scene taking pictures when a train derailed at the Racine Junction in 1906, as the result of a children’s prank. He documented the building of the new Main Street Bridge in 1907. He sloshed through the snow three years later to photograph a conductor shoveling a path for a Chicago-Milwaukee (North Shore) train that had gotten snowed in.

His photos show downtown buildings that are long gone, including the old Court House and the Rialto movie theater. He even photographed two different Hotel Racine buildings, one in 1906 and a newer one in 1922. Both stood at Sixth and Main streets, now a vacant lot since the Inn on theake was demolished. His photo of the Case Corp. headquarters in 1905 shows men in hats, horsedrawn wagons and streetcars making their way past the building, which sported striped awnings over its first-story windows.

Though Marshall had none of today’s high-speed films and lenses and other gizmos to work with, he tried his hand at night photography as far back as 1909, taking a natural light photo of Main Street that was lit up every night for a year to celebrate Racine’s Homecoming.

His photos would have been welcome on the pages of any newspaper today, but newspapers used few photos in the early 20th century, so his work remained largely unpublished until 1982 when Racine historian Gerald Karwowski and the weekly Shoreline Leader published a special section devoted to Marshall’s work. The response from readers was so good that the weekly newspaper published a second special section of Marshall photos in 1986.

Karwowski bought the collection of more than 1,000 Marshall photos from an antique dealer because of his interest in local history.

“There is no other collection like it,” he says, because it fills in a big gap in the early 1900s missing from other collections of historic photos of Racine. “So many (of the photos) are identified, which is also what makes them unique and is great for historical purposes.”

Marshall lived at 2200 Kinzie Ave. for about 40 years, before moving to an apartment at 1006 Park Ave. around 1970. Five years later, he was beaten by two men who broke into the apartment, and he then moved into a nursing home.

It was fitting that Marshall photographed the dedication of the Spanish-American Soldiers Monument in Mound Cemetery in 1909 because when he died April 13, 1977, he was the city’s oldest veteran of that war. He was preceded in death by his wife, Evelyn (1951), and son, Bob (1974). His grandson, Jack, taught at Jerstad-Agerholm Middle School and has retired to Green Lake.

He remembers his grandfather well. “Particularly, I remember holidays,” he said in a 1995 interview. “Everybody would have to follow his strict orders so he could get his family pictures the way he wanted. Sometimes he even moved the Christmas tree to a different part of the room.”

Many of Wilfred Marshall’s photos will be published in the Journal Times in the coming months as we help celebrate the city’s sesquicentennial.