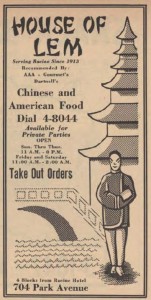 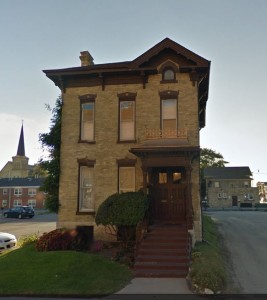 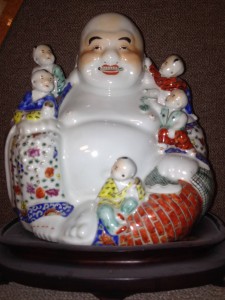 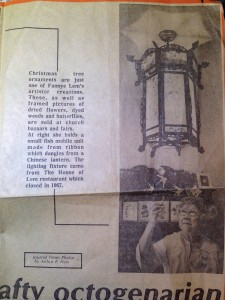 Fannye Lem is never without a project. She’s constantly seeking new mediums for her artistic abilities, she’s an inveterate traveler and she leads a busy social life.
This may not sound unusual except for one fact. Fannye is 82.
Her craft projects range from died pressed flower pictures to the same flower arrangements under clear contact paper for note paper. She also does needlepoint and quilling and makes figurines from shells, butterfly pictures, fish mobiles out of ribbon, flowers from egg cartons and big bird puppets. She also has made silver jewelry but no longer does so because arthritis prevents her from using the necessary tools.
“I never throw anything away and my friends and relatives know about my crafts so they save things they think I might use,” she explained. Her grandchildren in Germany have even caught butterflies and sent them to her.
In one of her framed butterfly pictures, Fannye decide rhinestone chips around the butterflies would enhance the picture. She admitted, however, that while trying to get them out of old jewelry, “I smashed more than I got.”
Another evidence of her saving habit is a ribbon bell pull with tiny snapshots of her 15 grandchildren. She had originally collected used eyeglasses for a local doctor who had a mission project, but had some left over and used the lenses to cover each of the pictures.
Her apartment on Main Street reflects her oriental heritage with silk embroidered pictures of Chinese scenes. Her dining room light fixture is a large carved wood lantern with oriental scenes on the four sides. She said it had come from their restaurant, The House of Lem, Park Avenue which closed in 1967 after 54 years of business in Racine. Her husband, Frank, with whom she ran the restaurant, died in 1968.
Where ever she goes, whether it’s to visit her daughter Nancy in Germany, daughter Jean in California, son Donald in New York, or son Charles in Madison, she said she is constantly looking for new craft ideas. A fifth son, Ming, died of a heart attack three years ago.
And, Fannye is constantly on the go. She said that in the last three weeks, for example, she had only spent one day at home.
“Well, take last week as an example. On Monday, a friend and I went to Chicago to the Water Tower shopping mall. We covered five of the seven floors of shops.”
On Tuesday, she was off at 9 a. m. to help make fruit cakes at the First United Methodist Church. That night she went out to the dinner. Wednesday night she went to the Altrusa Club dinner meeting. On Thursday, she went to another church group activity. Friday she went shopping in Milwaukee and Saturday she “had a day off.”
On Sunday morning, she went to church and then stayed to help wrap and decorate the fruit cakes for the church fair. When she was finished with that, she went to Memorial Hall to work the rest of the day in the Altrusa booth at the Holiday Fair.
“A friend offered to give me a ride home but I said it was only three blocks so I would walk. I think if it had been even one more block, I don’t think I could have made it. I was so tired.”
Fannye not only makes crafts for the church fair, but has also taught at five senior citizen centers. “I usually take three or four samples of the work and let the class select the one they want to do.”
And on one of her trips to visit her daughter in Germany, she taught a class of elementary school children how to make flowers out of egg cartons. She said her granddaughter acted as her interpreter. Each child proudly went home with a flower he or she had made,” she noted.
On another occasion, the pastor of her daughter’s Lutheran church in German invited her to talk to a women’s group at the church. She said she brought samples of her handicraft that she had given to her daughter. As a result, the women began to make articles of their own for church bazaars.
Fannye said she loves to go shopping and loves to eat out. “I’m ready to go any time. If someone called me at midnight with a good idea, I’d probably get ready and go.”
“You can probably tell, I love to eat,” she laughed as she patted her ample waistline.
What probably keeps Fanny going at her remarkable pace is her boundless enthusiasm, her interest in people and places, and her good natured philosophy.
For example, she says that if she wakes up at 1 a. m. and can’t get back to sleep, she refuses to lie in bed worrying about it.
“I get up, make myself a cup of coffee and a piece of toast and work on one of my crafts. When I’m tired, it may be 3 a.m., I return to bed and sleep until 8. I get enough sleep.”
The walls, shelves and tables of Fannye’s apartment are covered with her crafts and artwork and she confessed she’s got enough untouched projects around to keep her busy for three more years.
One of her most recent projects was a “flusterated woman” pencil or pen. It was an idea she picked up from a craft class while visiting a friend at the Masonic Home in Dousman. The top of a pencil or pen gets a yarn head complete with tiny eyes, eyebrows and mouth. The hair is tied with a contrasting yarn string. When the pencil is whirled between the hands, the hair separates and flies in all directions.
Crafts, church, club work, and social activities are not all this octogenarian does. One of her volunteer duties is telephoning for the Republican Women, a Christian Women’s group, and the Altrusa Club. “The trouble is that I know so many people that I get to talking to friends and then get behind in my calls,” she said. 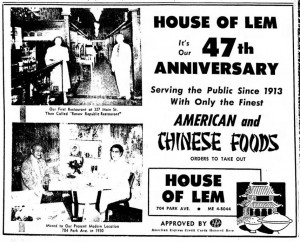 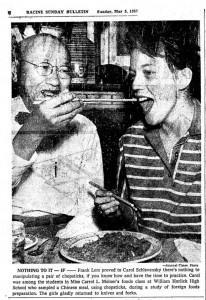 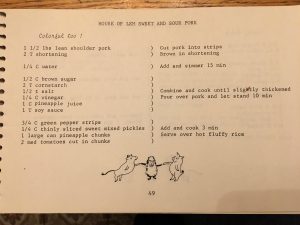 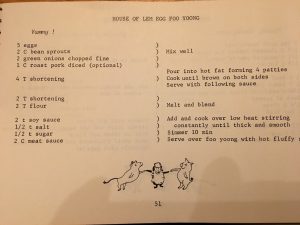 3 thoughts on “Frank Lem and Chinese Food in Racine”